Memorial Candle Tribute From
Dana L. Sweeny Funeral Home
"We are honored to provide this Book of Memories to the family."
View full message >>>
In Memory of
Grace Elizabeth
Kinley
1926 - 2017
Menu
Plant a Tree In Memory of Your Loved One
Click Here 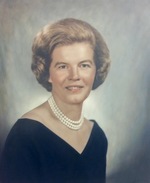 Born June 13, 1926, she was the youngest daughter of the late Samuel and Mary (McFarland) MacPherson.

Grace was a Registered Nurse, graduating from the Halifax Infirmary School of Nursing. She practiced hospital nursing at the Royal Vic in Montreal, Halifax and Bridgewater and especially enjoyed working in the nursery and for Dr. Graham in his Halifax office.

Grace was an active volunteer in her community. She was a member and served as an elder at St. Andrew's Church. She was President of the Fishermen's Hospital Auxiliary, Regent of the IODE, an active member of the curling club, and enjoyed skating from a young age and later with the Brittle Bones club.
She enjoyed playing golf and promoting the sport so after her time as President of the NS Ladies Golf Association, established the Grace Kinley Golf Trophy for friendly play between the south shore clubs. She happily attended the 50th anniversary celebration for this tournament.

Grace liked tole painting, bridge, travelling and sailing with her family on the "Gypsy". She was honoured to serve with her husband who was Nova Scotia's 29th Lieutenant Governor and as patron of many charities.

The family extends a heartfelt thank you to all Grace's care givers for their special care.

In lieu of flowers memorial donations may be made to charity of choice or St. Andrew's Presbyterian Church, Lunenburg branch of VON particularly their Meals on Wheels program, or Health Services Foundation of the South Shore.