In Memory of
Borden  Robert
Rhuland
1942 - 2018
Click above to light a memorial candle.
Memorial Candle Tribute From
Dana L. Sweeny Funeral Home
"We are honored to provide this Book of Memories to the family."
View full message >>>
Plant a Tree In Memory of Your Loved One
Click Here
Menu 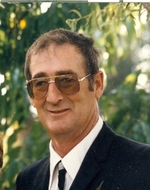 The family of the late Borden Rhuland, age 76, of Dean’s Corner, would like to tell all family and friends of his passing after a long battle on Wednesday, August 1, 2018 at Fishermen’s Memorial Hospital, Lunenburg.

Borden had been a fisherman all his life. He fished out of Lunenburg and Liverpool and was always happy when he was on the high seas and inshore fishing on his cape boat (Ask Pat) for lobsters.

He was predeceased by his father, Albert, mother Annie and brother, George and son in law, Andre Hickey.

Funeral Arrangements are under the direction of the Dana L. Sweeny Funeral Home, 11213, Hwy. # 3, Lunenburg. At Borden’s wishes there is to be no funeral or visiting hours. Interment at a later date in Hillcrest Cemetery, Lunenburg.

In lieu of flowers, donations to the Multiple Sclerosis Society of Nova Scotia would be appreciated.

We would like to thank Dr. John Jenkins, 2nd. Floor, Fishermen’s Memorial Hospital, Medical Nurses and staff and also the Dana L. Sweeny Funeral Home, Lunenburg, for all the care that Borden was given. Thank You from the Family.