To share your memory on the wall of Valerie Meister, sign in using one of the following options:

A receipt has been emailed to the address provided. A receipt may also be printed.

Print
It is with great sadness that the family of Valerie Hotchkiss Meister, 91, of Lunenburg and formerly of Stonehurst announces her passing on Wednesday, September 9, 2020 at home.

Born in Nichols, Connectic... Read More
It is with great sadness that the family of Valerie Hotchkiss Meister, 91, of Lunenburg and formerly of Stonehurst announces her passing on Wednesday, September 9, 2020 at home.

Born in Nichols, Connecticut, USA, she was the daughter of the late Floyd and Marguerite (Meade-Smith) Hotchkiss.

Val received her education from the University of Connecticut in Agriculture with a degree in Animal Husbandry and Bacteriology. She and Earl, along with their family, came to Nova Scotia in 1979, where she was a Basket Maker in the Black Duck Gallery and involved later with the Lincoln Reef. Over the years, Val was a founding member of the Lunenburg Folk Harbour Society.

Besides her parents, she was predeceased by a son, Harland and brother, Alan and three grandchildren.

Funeral Arrangements are under the direction of the Dana L. Sweeny Funeral Home, 11213, Hwy. # 3 Lunenburg. At Val’s request, cremation has taken place and there will be no memorial service.

In lieu of flowers memorial donations may be made to the V0N Lunenburg County or to the Folk Harbour Society.
Read Less

Print
In keeping with Val's wishes, there is to be no public memorial service.

We encourage you to share your most beloved memories of Valerie here, so that the family and other loved ones can always see it. You can upload cherished photographs, or share your favorite stories, and can even comment on those shared by others.

our heartfelt condolences for the loss of dear Val. I still remember how warmly she welcomed us in your home when you brought on the 2 German girls ( Birgit and me), about 23 years ago. Over the years Manuel and I spent a few very entertaining "Happy Hour" in your home. Val was kind and had a great sense of humour! She will not be forgotten! Thinking of you during this difficult time. Much love! Marion, Manuel & Birgit
Comment Share
Share via:
PM

Posted Sep 17, 2020 at 12:34pm
Dear Earl and family,
Our thoughts are with you as you grieve the loss of dear Val. She was such a friendly, hospitable woman who was loved by so many people. We came to know Val through her beloved Folk Harbour and saw first-hand the difference her contributions had made right from the beginning. She will be remembered every Folk Harbour at the Val Meister Young Fiddlers' Workshop and through Gordon Stobbe's wonderful tune, "Val's Dream." It was a privilege to be invited to Happy Hour where Val beamed, welcoming friends and family from near and far with open arms; those were precious hours to us and countless others. She was a kind, spunky and caring woman and she will be missed.
Comment Share
Share via:
DR

Posted Sep 14, 2020 at 04:53pm
Dear Laurie, Earl, Betsy and Carl and family,
We extend our condolences. Were it not for the pandemic, we would have been catching up with Laurie this summer. I feel sorry not to have known Valerie. I read about her interests and think I would have found several things in common. May she rest in peace, and may good memories of her sustain you in the time to come. Love,
Deirdre Roberts and David Edson, Middletown, Connecticut
Comment Share
Share via:
DA

Posted Sep 14, 2020 at 11:42am
Earl, Betsy, Carl and Laurie, I am so sorry to hear about your mom's passing. As I wrote to Laurie on Facebook when I heard the news, your folks and mine were such good friends and had so many great times over the years in Bethlehem as well as when my folks visited them up there. From our sheep in the 1950's which I believe we may have gotten from your folks, to Catch and Madrigal singers participation, to Couple's Club events, to family visits, New Year's Day parties that Val and Earl always attended, to your folks' wonderful hospitality toward me when I lived with you guys briefly after our house fire while it was being rebuilt, to NS visit my folks and Doug made to spend with your folks (leading to their eventual purchase of land up there on a lake as well) and to the many, many long discussions and great times they shared over the years, Val (and your dad), played an especially great part in my parents lives. Please pass along my (and my sister Lisa's) condolences to your dad, to Betsy and to Carl. My thoughts and prayers are with all of you and your family at this difficult time.
Comment Share
Share via:
KM

Posted Sep 13, 2020 at 07:16pm
Laurie and Family, We are so sorry for your loss, Thinking of you during this difficult time .
Alan & Karen McMullin
Comment Share
Share via: 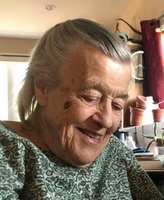 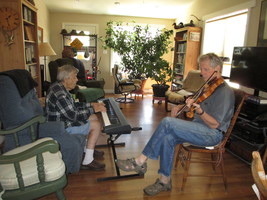 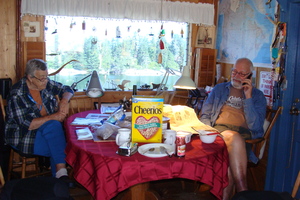 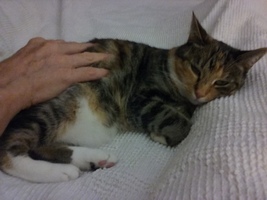