To share your memory on the wall of Captain Harold Romkey , sign in using one of the following options:

Provide comfort for the family of Captain Harold Romkey with a meaningful gesture of sympathy.

Print
It is with deep sadness that the family of Capt. Harold James Romkey, 95, of Garden Lots, announces his passing, on Tuesday, January 8, 2019 at Rosedale Home for Special Care, New Germany.

Born in Eastern Points, he was the son of the l... Read More
It is with deep sadness that the family of Capt. Harold James Romkey, 95, of Garden Lots, announces his passing, on Tuesday, January 8, 2019 at Rosedale Home for Special Care, New Germany.

Born in Eastern Points, he was the son of the late Thomas and Ada (Corkum) Romkey.

Harold went to sea at an early age, first dory fishing and from there moved on scalloping with Adams and Knickle Ltd., where he was Captain of the Sharon Dawn and Mate on several of the scallop draggers. After retiring from the sea in 1980, he worked at National Sea Products for approximately 10 years, retiring in 1990 at the age of 67.

He had a great love and passion for his family, always interested in their daily lives and endeavours. Because of this he has left many treasured memories for them. He will be deeply missed by all who knew him and visited him.

He was a member of St. John’s Anglican Church, Lunenburg. He enjoyed gardening and long drives with his wife, Marjorie. He also had a great passion for reading the Bible, listening to Christian music programs and watching the history channel in his later years.

Besides his parents, he was predeceased by his wife, Marjorie, brother, Gerald and sister, Jessie.

Funeral Arrangements are under the direction of the Dana L. Sweeny Funeral Home, 11213 Hwy #. 3, Lunenburg, with visitation Friday from 7 to 9 p.m. Funeral Service to celebrate Harold’s life will be held on Saturday at 2:00 p.m. from St. John’s Anglican Church, Lunenburg, Rev. Laura Marie Piotrowicz, officiating. Interment to follow in the Upper Blue Rocks Cemetery, Blue Rocks.

Flowers from immediate family only, memorial donations may be made to the Rosedale Home for Special Care, New Germany, St. John’s Anglican Church, Lunenburg, Upper Blue Rocks Cemetery or to a charity of your choice

Provide comfort for the family by sending flowers

We encourage you to share your most beloved memories of Captain Harold here, so that the family and other loved ones can always see it. You can upload cherished photographs, or share your favorite stories, and can even comment on those shared by others.

Posted Jan 19, 2019 at 11:51pm
Faye, Dale and families: My sincere condolences on the passing of your Dad. I pray you may be comforted by the memories you all share about him. Give yourself the permission to grieve....you will have moments of laughter, tears and times of feeling numb. My thoughts and prayers will be with you.
Marlene Mercer and family
Comment Share
Share via:
RF

Posted Jan 13, 2019 at 04:47am
In this sorrowful time, we would like to extend to you our heartfelt condolences.

Posted Jan 12, 2019 at 02:35pm
Faye, Dale and your families. My deepest and most sincere condolences on the passing of your Dad. Rest In Peace Uncle Harold.
Comment Share
Share via:
Posted Jan 12, 2019 at 08:59am
Faye, Dale and family
Every seaman knows the command at such a moment 'steady as she goes'. You are in my thoughts at this time.
Comment Share
Share via:
JK 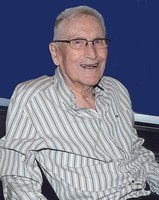